TFA specialises in soccer coaching programs for children aged 4 to 18 years of age, and currently works with more than 100 schools in South East Queensland. TFA programs are designed to enhance both the skills and performance of young soccer players, but also provide children of all ages and ability levels with a fun and safe environment to learn and play. 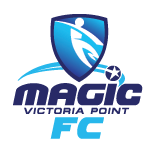 In January 2013 Andrew Robinson held discussions with Kristina Dickman of Redlands Sport and Recreation. It was discussed the lack of playing facilities and Football teams in the South East Brisbane area. After further talks, Victoria Point State High School and Victoria Point Primary School were discussed as a possible training and playing venues to form a new club and play games in Football Brisbane. A committee was formed, the club became incorporated and a year later promotion began to recruit junior players. A presentation was made to Reuben Robertson of Football Brisbane and a site inspection was carried out at both Schools. Cr Lance Hewlett was also present to support the Club’s entry to Football Brisbane.

V.P. Magic F.C. offer professional coaching allowing players to reach their full potential. We hope to field competitive teams in each age group and we invite players who are seeking a professional training program to come to the Club. V.P Magic F.C is open to players of all abilities. TFA are pleased to announce we will be opening a brand new region covering North Sydney, Central Coast and Newcastle. Josh Rose, current Central Coast Mariners player will be the manager in the new region. Josh will be supported by Head Coach Tom Peak.

I was born and grew up in Rockhampton, Queensland, and for the simple fact that I have a love for the game of football it helped drive me to become a professional in the game. My football has taken me to different parts of the world, learning more about the game and the different cultures as I go along.

I believe that my football never really flourished until I began playing for Universitatea Craiova in Romania. The passion that Romanian people show for the game really opened up my eyes to how much this game means to some people. Under the guidance of former Juventus player Nicolo Napoli he helped develop my game to a higher level and I became a much more consistent player. I really enjoyed my time in Romania as I was improving my understanding of the game and really enjoying my football.